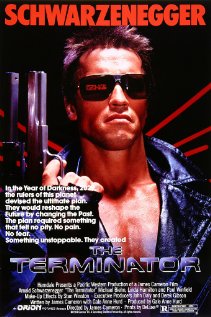 The Terminator – Official Poster – from IMDB.com

When I was 12 years old my parents took us to Los Angeles. It was a dream come true. It was my first overseas trip, we went to Disneyland, Grand Canyon, Las Vegas (not so fun as a 12 year old, but the Stratosphere was awesome) and of course Universal Studios. I was so excited. My love of film had been growing since I was a child and I was so excited to see where the movies were made. One of the things I remember most about Universal Studios is the Terminator “ride”. We all entered a room and a woman appeared on a balcony-like platform and introduced us to the ride, the way she said “Suuuuupeeeeer” had us all in giggles and then a guy ran out on another balcony saying it was a trap and not to go in. There was a moment where I stood there and thought “what if it really is a trap?” and the terror started to fill me, like it was supposed to I guess. I remember talking to my mum about it afterwards, wondering why we were so willing to go along with something we knew could be dangerous. I don’t recall her answer but it is one of the moments that has stuck with me till this day.

Since then I’ve always been a little cautious of actually watching the film, and so until a few days ago when my housemate demanded I watch it because I wasn’t a true movie buff until I did (those weren’t her words but it was the gist of it). So I finally watched The Terminator. And I don’t know why people don’t rave about it more often because it is actually a great action film for it’s time. I mean I wasn’t even born when it was made and it brilliantly encapsulates the potential terror that can come with the advancement of technology and the way experience the world through the eyes of media and the way we rely on technology. Of course there were moments when it was just a little silly and the 80s clothes are somewhat special to behold, but it was a good action film all around. And I finally understand the Skynet references that people make now.

I ended up live tweeting the entire film which I think I might continue to do for old films I watch (follow me on twitter @vicariousfilm). I really enjoyed watching it even though a lot of it was a bit gross and invasive, like the bit with his eye ball, oh my, I never want to see that again, it reminded me too much of Salvador Dali’s film. Ew. The main reason I like the film was because it was the female that triumphed over all the male wreckage. And although she was the typical damsel in distress and ended up pregnant at the end, I still felt like she was the fight through the latter part of the film. I just spent most of the time wanting Kyle to let go of Sarah Connor’s hand and let her run for herself because I had faith she’d be much quicker without his “help”. But there you have it, it was the 80s after all.

Like I’ve said previously, I grew up with an older brother and watched action films with him all the time. I attributed my love for action films to him but I really do love the hero stories they capture. I want to live as a hero, to be able to make those tough life or death decisions, to live with fear being a motivator instead of an inhibitor. I wish I was as badass as Sarah Connor and I hope if a handsome man comes and tells me my life is in danger that I would be able to. I guess we’ll see what happens when Skynet does engage humanity in war.

Is there a film that people rave about and always tell you to watch that you finally saw and it was awesome? Or are they all a little overrated?