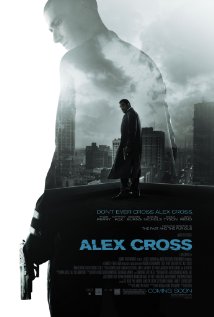 I could write an essay on all the reasons why this movie is now in my top three worst ever films I’ve seen list. I’ll try and convince you not to spend any time, energy, money, or basically anything other than reading this blog on the so-called film Alex Cross in a shortish blog.

This film did everything wrong. From the music to the script, to the casting and the pace. It basically started out being really bad and then got unbelievably worse. Let me start by mentioning the script and the direction. I’ve never read a James Patterson crime thriller before but I’m sure not going to now. The adaptation of the script was so bad that pretty much every line was cringe-worthy. There was only one line in the entire film that was good and even then if it had been in any other film it would’ve sucked. The pace of the film was slow and they tried so hard to develop the characters so much that rather than liking the characters I just wanted them to get off the screen and let me have my life and imagination back. The screenplay may have looked fine on paper, actually no, I take that back, it would not have looked fine on paper unless you’re a two year old and need to be walked through every little thing that happened. It was amateurish in everything apart from the quality of the camera and the lighting. I could have written something better and I know that I’m not a great writer. It was so painful to sit through and I began to shrink in my seat as each scene progressed only to rise when something was so ridiculously stupid that you couldn’t help but laugh.

The music was cheesy and agonizing. It had the awful sappy music when someone was having a deep, “character defining” moment, or “fast-paced” when there was a bit of action. It stood out like a sore thumb, which music in film should never do other to compliment the scene. This music took away from the film.

Tyler Perry needs to take some lessons on how to bring truth to characters, his “performance” of Alex Cross was not good, to say the least. I didn’t care about his character or what he had been through. For someone that has been in a lot of films it makes me sad that I know so many of my friends that could’ve played that character better, and they aren’t actors. Oh and then there is Edward Burns who plays his best friend/partner and he was just as bad. I wanted him to die at one point because he was so freaking annoying. I don’t usually wish death on characters but this movie pushed all the wrong buttons for me. And then the two main female leads get killed off quite quickly, yep, thanks for that one guys, push the women out of the picture, well done. I mean I don’t mind a bit of damsel in distress stuff in films, but to kill off the characters altogether, that’s just low. The only one that I give any credit to with his acting ability is Matthew Fox (Jack from Lost). Fox is creepy and scary and redeems the film just a little only to have it come crashing down on him via bad directing. There is one moment where he looks at the camera to deliver a line and you just have to ask yourself: WTF whose decision was that and can someone please get them out of the film business immediately?! And finally there is John C. McGinley (Dr Cox from Scrubs) who just shouldn’t do drama, ever. Stick to comedy John, you really really shouldn’t do drama. I didn’t care that his character got blown up, he was annoying and at this point I just wanted the film to be over.

I’ve seen a lot of B-grade action films, but this isn’t even making the B-grade, this gets an F. It is so bad that it is now trumping Vanilla Sky on my list of worst films ever. I can’t express how truly wretched and unendurable this film was. I’m so glad I got to see it with critics and didn’t have to pay for a ticket, I would’ve walked out and asked for my money back. When there are so many other great independent, or even Hollywood, films that are way way way better than this shite I just want to question those who are making the decisions of what to make and what to show in cinemas. This doesn’t deserve to go to DVD.