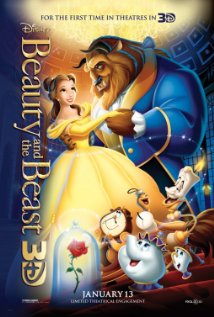 Beauty and the Beast – 3D Poster – from IMDB.com

There is something truly magical about Disney. It is the fantasy it creates of a world where issues can be overcome, where evil falls and good triumphs, where all things end in the most spectacular of ways. But the endings have never been my favourite part. I also like to see where the characters begin. And this is why Beauty and the Beast is still my favourite Disney film. Not just Disney “princess” film, but Disney film overall. And it is all because of who Belle is at the beginning of the film.

The first time you meet Belle she is walking into the village and the whole town erupts in song around her. The way she treats people through this sequence is what I love and the fact that she is strong, intelligent, polite, respectful, humble, and the same to all people. Her sense of equality breaks through the walls of the judgment she faces from the town, and even when it comes to the ghastly Gaston, she is polite and dismisses him respectfully, if only a little tersely. She is accepting of everyone and the one person she tells her true judgments to is her father, and even then she gives reasonable accounts of why she dislikes someone like Gaston.

Her whimsy, strength, sacrifice, boldness, and adventurous nature continue to be what shapes her throughout the film. When she comes up against the Beast her response is one of fearlessness and willingness to take him on and see past the harsh exterior of his beastly appearance. This is what I love about Belle. I love her character for every single moment of this film, there is never a point when I don’t like her or disagree with what she does. She is honest and kind and thinks of others as well as herself. She is encouraging and joyous of everyone and seeks to treat them as she would like to be treated. The only moment when I think she does the wrong thing is when she goes into the west wing where the Beast has forbidden her to go, but even then I would’ve done the same, just not on the first night I was there… And even then you expect it because, let’s be honest, the Beast is asking for it as soon as he says it’s “forbidden”.

Belle was my role model as I was growing up. She was my heroine of all literature. It was her intelligence and strength that captivated me and made me want to be her. I didn’t necessarily want to fall in love with a prince and live in a big castle but I did want to be strong and wise and kind.

Who has your role model been from a film, book, tv series, or other form of literature?