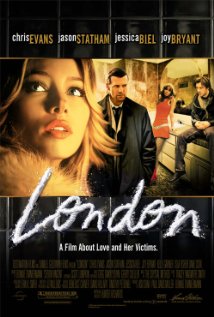 I tend to go through phases of watching a particular actor’s films because I become obsessed with them and this week with the Avengers coming out on DVD/Blu-Ray, I have chosen Chris Evans as my obsession. I really hadn’t watched much of Chris Evans before Captain America but going back and watching bits and pieces of his career has been interesting. He’s done some not so great films but he’s also done some surprisingly good films. London is one of the good ones in my mind.

It’s a drama centred around Syd (Chris Evans) who is a bit of a druggie – cocaine mostly – and who is trying to win back the love of his life, London (Jessica Biel), who is about to move away and start her life with her new guy. He meets Bateman (Jason Statham) the day of her going away party, which he wasn’t invited to, and takes him along. The film then consists of flash backs of London & Syd’s relationship and Syd and Bateman in the bathroom of her best friend, Rebecca’s (Isla Fisher) parents house and their discussion of life, relationships, religion, and where things went wrong. It is a gripping film as you are drawn into these men’s lives with little prior knowledge about them and as their friendship as strangers grows you see how it is they came to be at this point in their lives. Evans shows a different side to his acting as he portrays the tormented soul of this grown man and standing next to Statham doing the same is something I didn’t think I’d ever see, and they are both incredibly brilliant. It has actually made me think of them as actors rather than action movie stars. They show depth to their characters and are able to capture a great deal of emotion and convince you that these men are so much more than you just see on screen. They are brilliantly directed by Hunter Richards, also the writer, and the film delivers a unique look into this world. Biel and Fisher are also brilliant in this film and ground the narrative.

I really liked this film and I really loved Evans and Statham in these different roles. They are brilliant action stars but it is great to know they can really, truly act. I really recommend seeing this film, it’s edgy and different and is able to deal with big questions of life and love in a bathroom with Van Gogh and Cocaine. Go watch it.