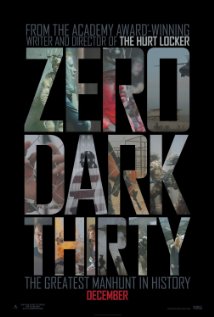 It took over ten years for Osama Bin Laden to be found, captured, and killed. Zero Dark Thirty is a film about how long the journey to finding him was, and how the things the military did to get him were “necessary”.

Some may say that this film is pro-torture and anti-Islam and in some ways it is but it is so much more than a propaganda film. Kathryn Bigelow has a flare for creating intensely gripping and realistic films and Zero Dark Thirty is one of her best. The intensity of this film doesn’t come from the subject matter, although it is a gripping story. It comes from the way Bigelow has directed the film. It is the moments of stillness that make this film so fantastic. You view the characters from the outside, disconnected and watchful but when it comes to the highly intense scenes you are thrown into the action with deliberate closeness. It creates for an interesting experience as a viewer as you feel both disconnected and deeply involved at the same time. It is a fascinating and wonderful sensation as a viewer.

The other point of greatness in this film is Jessica Chastain’s performance. It is perfect. Chastain portrays a real woman. It isn’t a feminine or masculine spy type but a perfect balance of intelligence and humanity. It is a mellow and grounded performance that reveals so much about the reality of the resilience of intelligence workers in war. The harshness of their work and the reality of war is portrayed so realistically through this film that it gives this story a believability unlike other war films that have come before it.

This film is a narrative of how the world leader of terrorism was killed and how a woman’s determination to find him was so strong that she devoted her life and career to the cause. It tells the tale of how loss and moral ambiguity can cloud a person’s judgment and about how having a single focus and single mission in life can leave you with a sense of empty relief when it is all said and done.