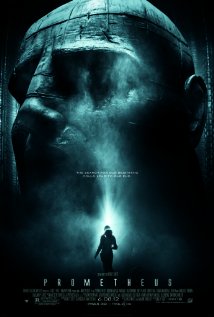 I haven’t seen the other Alien films, and now I remember why I haven’t. I’m not a big fan of viscous visuals. I do however like Sci-Fi and aliens and so I went to see this film with a friend who also likes aliens and Sci-Fi. We both came out feeling slightly ill but I spent sometime reflecting on the subject matter of the film and have come to the conclusion that although I didn’t like the execution of the story I like the ideas behind it. The idea of searching for a creator of humanity, where we get our identity, where we came from, what drives us, and all the other scientific and philosophical questions of life penetrate Sci-Fi quite frequently and this is no different in Prometheus. The search for where human beings came is where we start and where we end in this film. The circular journey is the main thrust of the film and the answers and questions that the movie leaves you with are unsatisfying but that is the point. I found myself journeying with these explorers into this unknown world and getting lost with them and then being violently ripped back from it when something gross and violent happened on screen at which point I slid down in my chair and tried to hide my eyes from the viscousness of the subject matter on screen. The action, the visual effects, the characters were compelling and I was happy to ride along with them but I have to say my favourite part of the film was the creepiness of David’s head at the end. There was just something so wonderfully comic and tragically horrendous about this woman being left alone to search the universe for answers with a severed head and a robotic body.

I didn’t enjoy watching Prometheus and I don’t think I ever will enjoy watching the Alien films. I still feel slightly ill even thinking about it. But for what it is and what it tries to be I think it does okay. There are points where it fails far short of being a great alien sci-fi film and it disappoints your average joe if they are after something great and groundbreaking but there are some entertaining moments. I can’t stay I would recommend it but if you’re into that kind of thing, go for it.